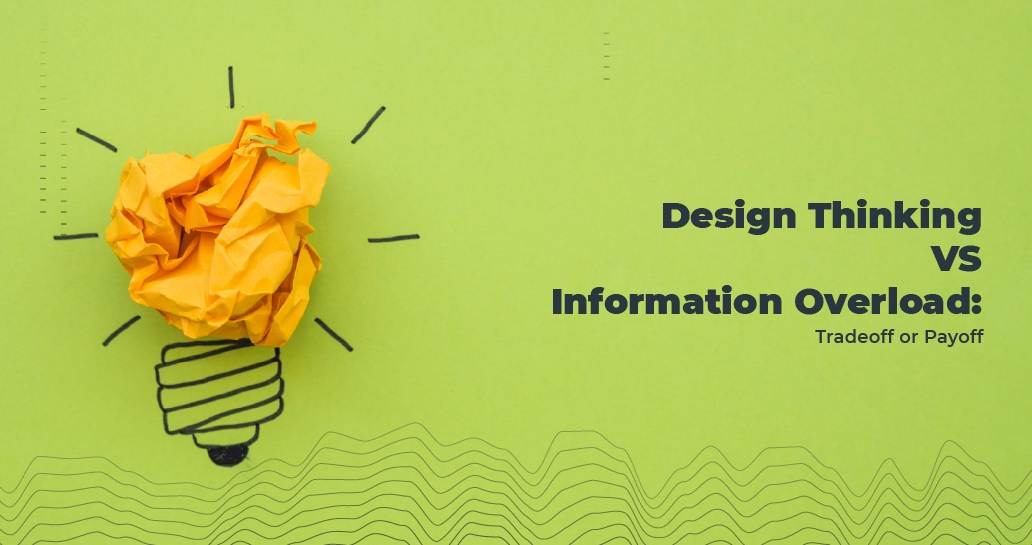 Fortune 500 brands who understand where to sway between design thinking and information overload are raking billions in yearly.

The Design Management Institute report shows that the companies who have design at the heart of their processes have outperformed the S&P Index for a decade now. In context, these companies beat the index by a massive 228%

The Dangers of Information Overload

This shows where the ball falls

The Dangers of Information Overload

We have access to increasing sources of information every day, and the numbers are not shrinking either.

Information overload is a serious problem that keeps affecting the profit margins and bottom-line of the brands it plagues. When the consumer has too much to process, they end up not deciding at all. In the case that they do, many end up making the poor choices.

The logic behind this poor choice, so to speak, will rightly point to the consumer not having the right environment to have made the right decision. This causes them to jump ship, reducing brand loyalty and undercutting the market share of the affected business.

Having access to a large chunk of historical information to pull from is not helping matters either. This creates a tense atmosphere of determining what information to make use of and what to leave out. That, however, could be the make-or-break moment in the entire product design stage.

The problem with information overload is not the knowledge of what to do or how to achieve it. Various brands can get the same things done – but not all of them can get it done the right way. The rate at which these brands can put design thinking at the heart of their products will determine how well it comes out.

Hick’s Law is an ideal reference to understand the impending doom that information overload brings to a product. To paraphrase, Hick’s law agrees that a person will take a longer time to make a decision when provided with more choices to pick.

While that is true, it does not tell the entire story.

Seeing information overload as a function of data presented to the consumer alone will not cut it. Designers often identify trends of bulky data and cut back on it, but that is yet to occasion the needed boost for their bottom-line. This almost defeats the entire purpose of reducing the information clutter anyways.

In isolation, reducing the data volume alone will do nothing. It might even help speed up the rate of consumer confusion in other cases. Unless this decluttering is married with proper design philosophy, that is.

This is what gave birth to design thinking.

Where Design Thinking Pays Off

Adobe reported that the companies fostering creativity have a 1.5x more significant market share than those who do not. These design-thinking companies have put the customer first and are being rewarded for their efforts.

Apple made a name for itself in the smartphone industry, not because it created a phone.

In the time when the iPhone launched, Nokia was already a behemoth, and a top Microsoft exec believed that the iPhone project was doomed to fail out-of-the-box. The iPhone critics back then did not consider that the smartphone could be packaged and presented in a new way.

The iconic Steve Jobs had more to do with this, though. He understood the needs of his target audience. He knew that the people do not just want a phone, but one that was punctual enough to perform tasks like emailing too. He also understood how the average user wants something that works without hassles.

So much was his passion for design thinking that he allegedly hired psychologists to work with programmers in designing user interfaces.

The best part about the Apple brand is how its design thinking was not pretentious. Even before you got to the main product, Apple retains one of the best packaging philosophies in the industry.

Right from the unboxing, the company is affording its audience a seamless experience. That continues into their time using the various gadgets in the ecosystem, and beyond.

Achieving that is a result of expansive thinking and extreme experimentation

Where information overload embraces reliance on what exists, design thinking challenges the norms to find new ways to better the consumer journey. It digs deeper into the consumer subconscious to know what they are looking for, cutting off all that they do not need.

Consumers are getting increasingly sophisticated by the day too. They can look through all the front you have put up to find the truth. This is what informs their loyalty in the long run – where 50% of design-led companies get to enjoy higher customer loyalty than their counterparts.

Everything in design thinking boils down to putting the people first. Be it the development of an app, a new software, building out a website or creating a physical product. Designing for the audience, rather than making what appeals to you alone, makes a huge difference.

This would explain the logic behind Steve Jobs bringing in experts on the human mind to have software built. As large a brand as Google is, they still had to test the Google Primer apps with a bunch of users before they allowed it out there. The same is correct for how Google goes about its Android OS rollouts, preferring to test the flow and processes with a select few first.

Testing products with the audience before the final rollout is becoming increasingly adopted among design-led firms today. Up to 83% of them, and growing, have tools and processes to make this testing process seamless. The tradeoff is that they are not afraid to show their vulnerabilities to the consumers who help them shape the product to be better.

That also shows how much these brands believe in flexible systems. When the feedback comes in, their agile teams can quickly swing into action to perfect the flaw while the consumers keep testing and reporting. This collaboration births an almost unbeatable product since it was fine-tuned to the taste of the end-users.

Likewise, the company culture is an excellent indicator of what goes into its products.

About 71% of the companies that have embraced design thinking also say that it has improved their working culture. We believe this to be the other way round. After all, the people are the culture – and they are the drivers of the internal design thinking. Thus, a shift in the culture is needed to perfect design thinking at the highest level.

Finally, know that less is more. Be it words, colours, icons or other features, the design should be such that more can be achieved by using lesser options on the table. That way, you give your consumer less time to decide and more time to commit.